So this week the challenge was to list the top ten phrases or words that draw you to a book – that cause you to pick-up a book at the library or buy it at the bookstore.

Much to the chagrin of some of my more loyal followers, I don’t read a lot of non-fiction.  I like the idea of non-fiction, but unfortunately, for me, it is too rarely done really well.  I am a storyteller and a lover of stories, reading a book that feels like a textbook, a research paper, or a treatise on someone’s personal opinions (often supported by their own personal interpretation of facts) just doesn’t work for me.  In this week’s top ten I talked about 1776 by David McCullough and how I didn’t like it as much as I had hoped.  I wanted to be told the story of 1776, I did not want to read a research paper on 1776, and while it was a well-written and well-researched book, it still felt like a research paper to me.  Being a fan of Thomas Jefferson (how can you not like a guy who donates 47,000 books to the Library of Congress?), I approached reading this book with some trepidation – I did not want to read a textbook about Jefferson, I wanted to be told his story, and I was not disappointed. 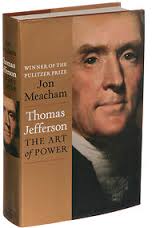 Jon Meacham tells the story of Thomas Jefferson brilliantly; while it is well-researched it is never dry, engrossing you in the world, ideas, and actions of this amazing and complex man.  Through his time as a lawyer, author of the Declaration of Independence, governor of Virginia, minister to France, Secretary of State, Vice President, and President Jefferson understood the delicate balance between philosophy and politics, that big dreams do not become reality on their own.  He knew how to work “the system” to achieve his desired ends, working through both his friends and enemies to achieve his vision for the country.

“He dreamed big but understood that dreams become reality only when their champions are strong enough and wily enough to bend history to their purposes.”

Meacham brings forth the complexity of the man, the conflict that sometimes existed between his actions and the beliefs he expounded.  In spite of these beliefs, Jefferson as a politician accepted and understood the realities of the offices he held, mastering the art of power to achieve the ends he desired.

“Our greatest leaders are neither dreamers nor dictators: They are, like Jefferson, those who articulate national aspirations yet master the mechanics of influence and know when to depart from dogma.”

As a person, Jefferson was well-educated and well-read, interesting and interested in numerous subjects, congenial and kind, a lover of all things French, devoted to his family, friends, and country.  However, Jefferson is certainly not portrayed as flawless, his inability to manage his personal finances, the contradictions between his words and his actions, his hypocrisy on the issue of slavery, are all addressed and show the many sides of this complex and fascinating figure.  Regardless of his flaws, he ultimately worked tirelessly to leave the world better.  He is a man who I would’ve liked to meet, to share a glass of his French wine, to sit and discuss philosophy and art and science and politics, leaving more enlightened and inspired for my time with him.

Eleanor & Park is set in Omaha in 1986 and is a quirky, heartwarming, tear-jerking story of two misfits who find each other, and find in each other someone who can love them and accept them as they are.  Eleanor starts her first day at a new school and her wild red hair and crazy clothing is doing nothing to help her fit in.  Park, part Korean and nothing like the rest of his perfect and athletic family, reluctantly lets her share his seat on the bus and the two sit in absolute silence for weeks until he notices that she’s reading his comic books over his shoulder.  Slowly he begins to share his comics and they come to realize that these stolen moments are the best of their days.  Their relationship evolves slowly and beautifully from there, although not easily – Eleanor comes from a difficult home situation with a violent stepfather and an unresponsive mother – Park’s family is unsure about this strange girl he is bringing home – but they have that feeling all of us can remember – that teenage love is pure and true and conquer anything…

“You don’t have to be the kind of beautiful that everyone can agree on. If the right person finds you beautiful, you win. You win forever.”

I loved this book, proving to me yet again that there are wonderful stories to be found in the young adult genre, and that they can be engrossing to those of us who are more adult than we are young!  😉  I have struggled with finding the words to describe what makes their relationship so enduring – it is quirky, funny, sweet, gritty, awkward, difficult, pure and honest – there are shared X-Men comics and mix tapes (remember mix tapes?!) that make me reminisce about my own teenage days – there is friendship and acceptance and hope, even when it seems there should be no hope left.

“The me that’s me right now is yours. Always.”

So this week the challenge was to choose the books that you thought you wouldn’t like and did – or those that you that you would like and didn’t.  This was a tough list for me – I try to read without expectation – and often it’s not until after I finish a book that I realize it failed to meet/exceeded expectations I didn’t even know I had!

First, five books I didn’t like as much as I thought I would:

Now onto five books that I liked much more than I anticipated:

One Shot is the ninth book in the Jack Reacher series by Lee Child and was recently made into a movie starring Tom Cruise.  In the books Reacher is 6’5”, 250 lbs, with a 50” chest, blond hair and blue eyes – Tom Cruise?  Not seeing it, but since I haven’t seen the movie I can’t complain too loudly – I’ve heard that it actually works…  I’ll let you know what I think once I’ve actually seen the movie!

Anyway…  Reacher is a former military policeman who now wanders the country freely – no vehicle, no luggage, no home, no credit cards – and manages to get entrenched in one disastrous situation after another.  Not only is he a really large and well-built and apparently good-looking guy, he is smart, resourceful, and does not hesitate when doling out justice according to his own moral code.  Much of his world is black and white with very little room for gray, he always sticks up for the innocent and the downtrodden, he always gets his guy (often brutally) and he always saves the day before he moves on and leaves another love-struck woman behind him.  While the books are mysteries, they are heavy on the action and the suspense, not simple whodunits.  The stories in the series are smart, suspenseful and fast-paced with just enough humor and romance thrown in to keep all that action from getting boring.

In One Shot six shots are fired from a parking garage into a crowded street leaving five people dead.  The police quickly gather a watertight case against James Barr, a former military sniper.  Barr denies his guilt and only asks for one thing – Jack Reacher.  Reacher is already on his way having seen the story on the news, but he and Barr have a history, and he is no friend of Barr’s.  When Barr is severely beaten while in prison, Reacher, Barr’s attorney, his sister, a reporter, and a private investigator will have to find out what actually happened and bring about Reacher’s own brand of justice.  Like all Reacher novels that I’ve read, this one keeps you guessing (who’s the traitor, what part did Barr play, why did any of this happen?) and in suspense until the very end (even though you know – logically – that Reacher isn’t going to die – there ARE more Reacher books!).

If you like action and suspense in your mysteries, this series is definitely worth checking out at your local library (and if you don’t like it they have an excellent return policy!).