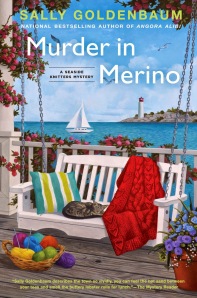 The Seaside Knitters series takes place in Sea Harbor, on the coast of the Atlantic.  A series of locals find themselves trying to rights wrongs and help the police solve local crimes.  One of the main characters, Izzy, owns a knitting shop where she meets with family and friends (her Aunt Nell, the eccentric elderly Birdie, the lobsterwoman Cass) on Thursday nights to knit, share food, and brainstorm.  The books are light whodunits, but the characters are warm, friendly, and familiar and the setting is one of my favorites – a northeastern coastal town – with all that brings – good seafood, unpredictable weather, and breathtaking scenery.

In this latest installment, Murder in Merino, there’s someone new in town and Jules Ainsley is raising some eyebrows as the beautiful woman jogs around town and is seen spending time with Cass’s beau.  When she insists on buying Izzy’s old house, even though she’s never been inside, it begins to look like her vacation may become permanent.  But when a local is found murdered in the backyard, Jules becomes the chief suspect.  What is Jules doing in Sea Harbor and what is she hiding? If she isn’t the murdered, then who in this small town is?  To add to the chaos, local politics, business partnerships, romantic difficulties, and planning for Nell & Ben’s 40th wedding anniversary have everyone on the run.

I have read previous books in this series and this was like coming home to a familiar set of friends.  I want to spend a Friday night sharing food and conversation with the gang in Nell & Ben’s backyard, I want to be invited to join the Thursday night knitting group.  And I want to have the time and talent to knit like they all do!  While I will gaze wistfully at the included pattern, I know it will never be one that I will complete…  While the mystery was puzzling, and I didn’t figure it out until near the end, I wanted to shout at the group to notice clues that were being dropped in front of them!  But the mystery in this series always takes a backseat to the characters, their relationships, and their warmth.  If you enjoy cozy mysteries, these are great to throw in your bag as you head to the beach this summer.

I received this book as an ARC in return for an impartial review as part of the Great Escapes Book Tour on Escape With Dollycas Into A Good Book.  The author is giving away a hardcover book at each stop, so leave a comment below for the chance to be randomly selected to win!  Check out the rest of the tour stops: 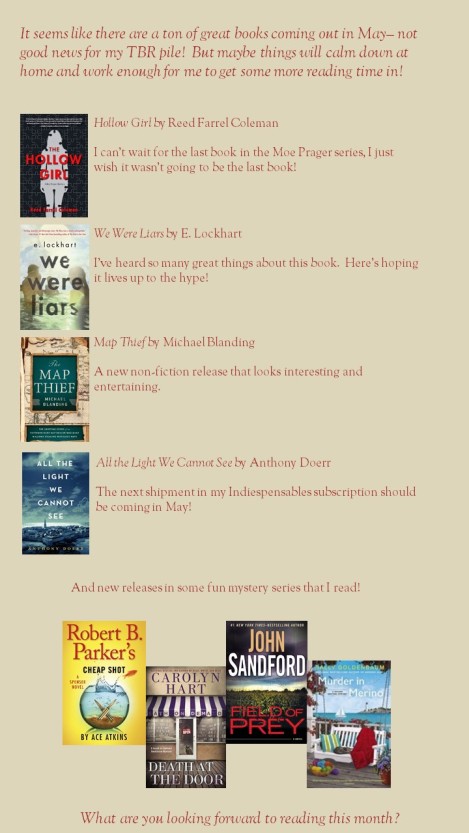 As I’ve mentioned before, I’m a fan of a good (and even some not-so-good) mysteries.  I thought I’d share some more quick thoughts on what’s new in some of my favorite series.

The Seaside Knitters Series takes place in Sea Harbor, on the coast of the Atlantic.  A series of locals find themselves trying to rights wrongs and help the police solve local crimes.  One of the main characters, Izzy, owns a knitting shop where she meets with family and friends (her Aunt Nell, the eccentric elderly Birdie, the lobsterwoman Cass) on Thursday nights to knit, share food, and brainstorm.  The books are light, typical whodunits, but the characters are warm, friendly, and familiar and the setting is one of my favorites – a northeastern coastal town – with all that brings – good seafood, unpredictable weather, and breathtaking scenery.

In this latest installment, Angora Alibi, Izzy is about to give birth to her first child, but something doesn’t feel right, things are not peaceful.  When a young man is killed during a scuba dive Izzy knows that they need to find the murderer among them before her baby is born.  Joined by all of her friends in Sea Harbor and traversing rumors of theft, drug deals gone wrong, and adultery, the killer is ultimately discovered, leaving Sea Harbor ready to accept its newest member.

The Bibliophile Mystery series follows Brooklyn Wainwright, a rare book expert in San Francisco, and she continues to trip over dead bodies and find the killer.  She is joined by her ever-so-handsome British boyfriend, Derek, who also happens to be a security expert and bodyguard.  There is a cast of other wonderful characters throughout the series, including her wacky, peace-loving, commune-living, hippy family.

In this latest installment, Brooklyn’s sister Savannah is cooking at the opening of a former classmate’s new restaurant with other members of her class.  When the restaurateur is found stabbed to death in the kitchen after the dinner is over, Savannah is the one holding the bloody knife.  Turns out, no one really liked their old “friend”, but who killed him and why?  Was it blackmail, jealousy, a spurned lover, or could it have something to do with the antique cookbook that he gave to Savannah years ago?

This may have been my favorite book in the series so far – a wonderful combination of my favorite things – mystery, books, and food!  It was fast-paced and fun, with a touch of romance and plenty of humor.  I never tire of Brooklyn’s family and some of my favorite scenes are those with her mother – what spells and incantations will she use next on her poor daughter?!

I am not a big fan of James Patterson’s books – it’s probably a good thing that I’m not or I’d have something new to read every week!  He is certainly one of the most prolific and best-selling authors today, although he does not actually write all of his books himself – hence me not being a huge fan.  If you look you will notice most of his books have his name in large letters at the top and then, in smaller print, at the bottom it will say “& someone else”.  Patterson admits to writing the outlines and then working with his writers on the editing process but leaving the majority of the actual writing to other writers.  Whether you agree with his methods or not (and I don’t), he sure knows how to sell books and I know that his works are among the most popular at our library.

Having said all of that, I do still read his Women’s Murder Club series.  The series takes place in San Francisco where Lindsay (a police officer), Claire (the medical examiner), Yuki (an assistant DA), and Cindy (a news reporter) all work to solve the latest murders.  12th of Never is the latest in the series and Lindsay is a new mom but her peace and quiet can’t last for long. An English professor is having dreams about murders and no one believes him until they actually start occurring.  A girlfriend of a star player for the 49ers is found shot to death in her car and no progress can be made on the case before her body mysteriously disappears from the morgue.  And Randolph Fish, a serial killer coming out of a two-year coma, is ready to talk about where the bodies are buried, but he only wants to talk to Lindsay.  So Lindsay is back at work, joined by the rest of the women’s murder club, working with her partners in the force, to see that justice is served.

This was actually one of the better in the series recently – the last several were a little too dull in my opinion.  The pacing was good, the parallel story lines were interesting, there were developments in many of their personal lives, and the ending was a bit of a cliffhanger.  Not high literature, but a fun quick read anyway.

The Faith Fairchild Mystery series centers on the detecting skills of Faith Fairchild.  Faith, a minister’s daughter, did what she swore never to do, and married a minister herself.  Uprooted from her beloved Manhattan, she now lives in Aleford, a small New England town, where she raises her two children and runs her own catering business.  Faith is a snob – a food snob and a clothing snob – but her devotion to her husband Tom (who orders his clothes from L.L. Bean and thinks cooking is opening a can of Campbell’s), her children, and her myriad of down-to-earth friends in Aleford make her likable.  Of course she does have that propensity for stumbling over dead bodies and getting involved in finding the killer!

In this latest installment, Body in the Piazza, Faith and Tom are on an anniversary trip to Italy to see the sites and spend a week at their friend’s new cooking school.  Their peaceful vacation is disrupted when they stumble across a stabbed man dying in the piazza in Rome.  When they leave Rome for the cooking school, the mystery follows them, many of the guests at the school are not who they seem, and Faith will need to use her skills to determine the truth and find the culprit.

This was a fresh addition to a series which I thought was faltering.  The descriptions of Italy and the food (I always leave these books hungry and wanting to cook!) were enticing, and the new cast of characters was a welcome break from Aleford.

The Knitting Mystery series takes place in Fort Collins, Colorado, and revolves around a group of friends and the Lambspun knitting shop.  Kelly is the main character, an accountant transplanted from the east coast upon the death of her aunt – the first murder in the series.  Along with her boyfriend, Steve, and a cast of close friends, Kelly becomes embroiled in numerous murders, generally to clear the name of a suspect who also happens to be someone Kelly knows and likes, noodling through the clues while she works on her latest knitting project.  The descriptions of the scenery in Colorado, the knitting shop, the food in the attached café, the relationships and camaraderie among this ever-growing and changing group of friends, make this a fun series.

In this latest installment, Close Knit Killer, a hated man is stabbed in the throat and left to die in his car at the end of the Lambspun driveway.  Everyone wanted him dead, but an instructor at the knitting shop and a local handyman were both seen angrily confronting him and are on the police’s radar.  Kelly ultimately discovers the shocking truth, saving the innocent from prosecution.  This installment ends with a cliffhanger, with the canyon ranch of a friend in jeopardy due to forest fires, leaving me awaiting the next installment to see how everyone fares.

Follow Watching the Words on WordPress.com
Join 143 other followers