The Caster Chronicles by Kami Garcia & Margaret Stohl is set in Gatlin, South Carolina, a small southern town where nothing ever changes, but things get interesting when Lena Duchannes comes to town.  The new girl at school is automatically an outcast at Jackson High, especially since she is living with her crazy recluse of an uncle, but for some reason popular and athletic Ethan Wate is drawn to her.  Lena is a spellcaster, bound by an ancient curse to be claimed by either Dark or Light, with potentially catastrophic consequences.

Spoiler alert!  It is too hard to discuss the remaining three books in the series without giving away some of what has happened, although I do my best to limit the reveals, but consider yourself warned!

In the first book of the series, Beautiful Creatures (which I reviewed here), Lena chooses her own fate, deciding that there is both Light and Dark within her, causing chaos in the spellcaster world.  Now in the second book, Beautiful Darkness, Lena, drowning in grief, guilt and uncertainty, starts keeping secrets and starts keeping company with her Siren cousin Riley and the mysterious John Breed.  But Ethan will follow her anywhere and starts on a quest through the Caster Tunnels to bring Lena home, accompanied by his best friend Link and the new Keeper-in-Training, Liv.

The quest brings a new sense of adventure and exploration to this novel, while Link’s humor and the welcome addition of Liv keep the characters fresh and fun.  Of course, the climatic ending leaves enough unanswered questions to make readers want to come back for the next installment of the series…

In Beautiful Chaos, Gatlin, and the spellcaster world, have been turned upside down.  Ethan and Lena have made it home to a town filled with locusts, violent storms, and record-breaking heat.  And a world where spellcasters’ powers are misfiring and wreaking havoc.  Ethan is affected too – finding himself plagued by dark dreams and seemingly losing parts of himself.  Suddenly he doesn’t like the same foods and can’t remember the names of people he has known his entire life.  What is happening?  And what sacrifice will be required to fix the order of things?  Because nothing comes for free…

Lena is back home and back as a regular part of the story and as almost-annoying as in previous books.  Suffering a bit from middle-book-in-a-series syndrome, this is not the best in the series, but it’s climatic and awful ending makes readers push on to the final installment.

Until he meant Lena, Ethan had spent most of his life dreaming about getting out of Gatlin, but now all he wants to do is find a way back.  In Beautiful Redemption, Lena is willing to sacrifice anything, including the safety of those Ethan left to save, to bring him home.  Full of puzzles, new characters and the return of old, Ethan will find that there are no free rides, and no way to have everything you want.  A bittersweet ending to a tale full of love and magic and sacrifice.

Overall, this is an engaging and fast-paced series.  Many of the characters – Macon, Marion, Liv, Link, Riley, Alma – make it worth the trip and override the potential frustration with Lena.  For fans of YA series full of love, danger, climatic endings, and magic this is a must-read. 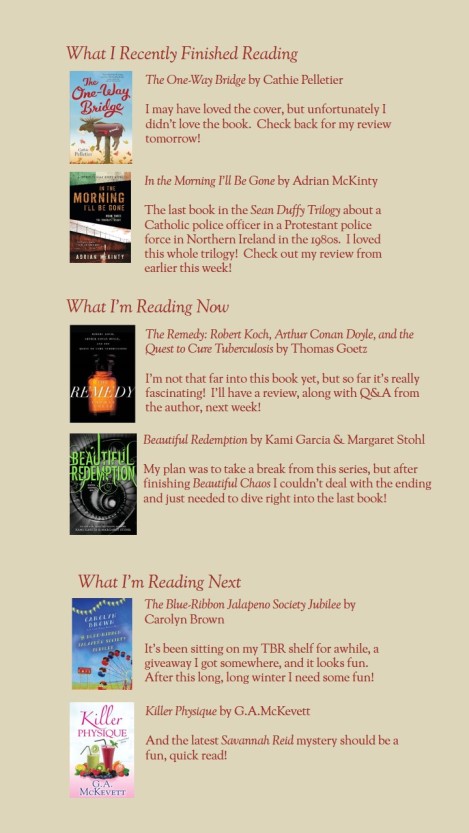